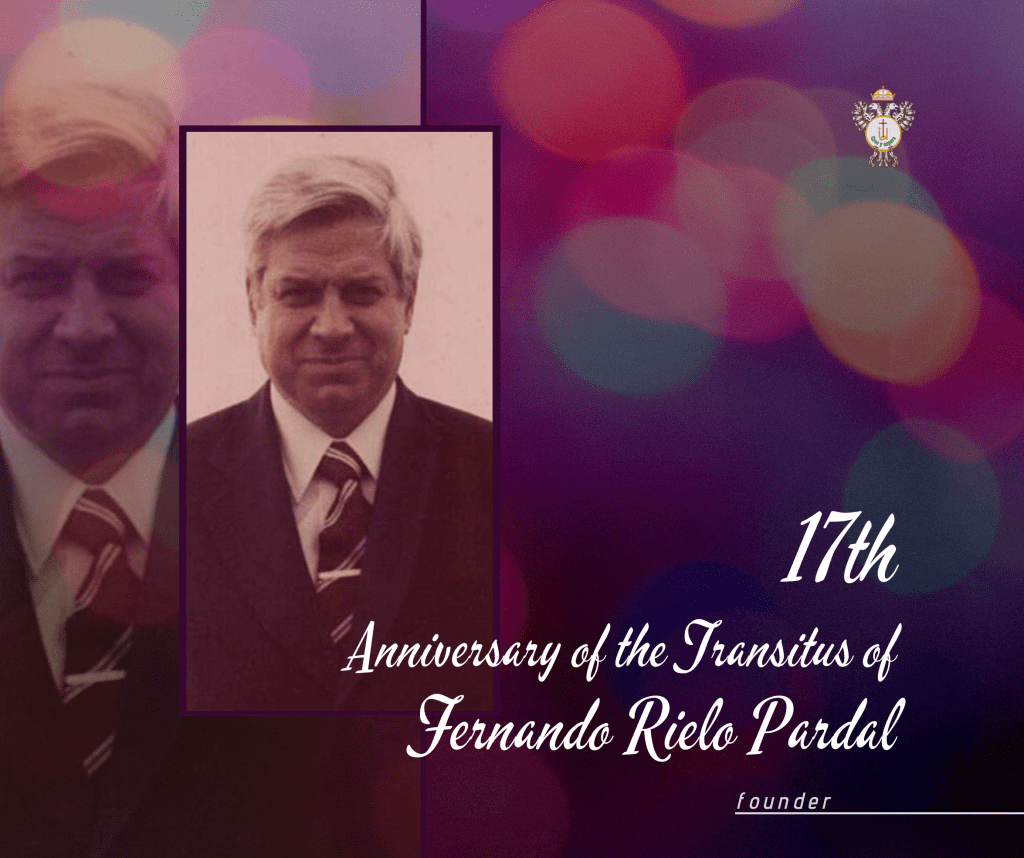 17th Anniversary of the Transitus of Fernando Rielo

Seventeen years have passed since the death on December 6 of the founder of the Idente missionaries Fernando Rielo Pardal, who gave his soul to God in New York, where he had been living since 1988. He had moved to the city of skyscrapers for health reasons because his right leg had been amputated and was to be treated at the prestigious Rusk Hospital. He thought of returning to Europe on many occasions, but Providence, which has its own foresight, determined that his stay there would be definitive. His life had begun in Madrid in the summer of 1923, being marked from the beginning by an immense love for our heavenly Father, who wanted his spiritual children to proclaim throughout the world the religious sonority, profound and unique, of this word: Abba, being masters in the way of pronouncing it, which in reality is to live it.

The years that have passed since that day, December 6, 2004, have only corroborated the wake left behind by those who, like him, have allowed themselves to be carried away by the urgency of the love of God. And in these current times – where they even try to erase Christmas from the greetings cards, where the faint-heartedness of believers who have not understood the grace of having been welcomed into the Church through baptism, who are surely ashamed to acknowledge their faith in the sectors in which they move, even if they do so in privacy -, the evidence cannot be denied: the engine that changes society and history, starting with oneself, is love with a capital letter to which I have appealed from this column on so many occasions.

Fernando Rielo placed his entire life at the mercy of the divine will. It included health, fame, a reasonable rest…, to have had an existence without the setbacks, difficulties and various sufferings that marked his at all levels, having as a clear and definitive objective to embody the Sacra Martirial that at the age of twelve was inspired after reading the lives of the martyrs he wanted to emulate. This most beautiful Sacra Martirial, which is part of the patrimony he has bequeathed to his children, is a promise to be nourished every second of the day: “I promise you, Lord, to live and transmit the Gospel with the sacrifice of my life and my fame, faithful to the greatest witness of love: to die for you”. Humanly speaking, the good parents of this world are ready to preserve their children from all evil and suffering. They offer them the best, the most they can get for them, and they spare no effort in their zeal to make them happy. This founder was also urged by love for the Holy Trinity, Mary and Joseph, the Church, his children, his great passions.

The apostolic avenues he left open are swelling with the interest of young people in Idente Youth, families in the Idente Family, intellectuals in the Idente School, poets, musicians, thinkers who express themselves in constant activities promoted by the Fernando Rielo Foundation, among others, in addition to those who have perceived in their intimacy that Christ whispers to them to follow him, and people of all ages and conditions do so in four continents in the religious institution he founded in 1959. The Motus Christi and the online Jacobean Route during this time of pandemic have been attracting the interest of numerous people.

The university world, the scholars of Rielo’s work, recognize the scope of his own thought, which again in 2021 was present at the VIII World Congress of Metaphysics inaugurated by Cardinal Ouellet and closed by Cardinal Osoro. With a program of great richness, which has had a privileged cast of professors, it has brought together 804 participants from 42 countries. All those who participated in this event have highlighted the vitality of metaphysics, its importance for the future of the person, echoing the contribution of Rielo. The IX Fernando Rielo International Prize for Sacred Music was recently awarded, and on December 18 the winner of the XLI Fernando Rielo World Prize for Mystical Poetry will be announced, the finalists being chosen from among 267 works from 29 countries.

These are some of the intense nuances of a life urged by love. There is no concession to waste time, no turning away from pain, which is welcomed with strength and joy – Fernando Rielo, who underwent surgery almost thirty times, had an excellent sense of humor – and all his talents are placed at the service of God and men, embracing his grace. Everyone’s life is touched by doing good, and an admirable mark is left, full of hope and faith.

A documentary on the life of Fernando Rielo, Founder of the Idente Missionaries